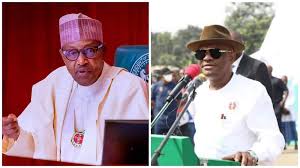 The Bayelsa helmsman said such support for Governor Wike could be taken for granted as Bayelsa and Rivers were one and with common interests.

He stated this on Friday when Wike and his team visited him in Government House, Yenagoa, to formally inform him about his presidential bid on the platform of their party, Peoples Democratic Party (PDP).

A press release by his Chief Press Secretary, Mr Daniel Alabrah, quoted Diri as saying that Wike already knew the challenges of people of the South-South and was adequately prepared to address them if he becomes Nigeria’s president.

Diri commended Wike’s developmental strides in Rivers and noted that the two states would remain united to protect their collective interests.

His words: “There is a thin line that exists between Bayelsa and Rivers states. For me, you know the challenges of the South-South people, especially that of Rivers and Bayelsa. You have worn the shoes and you know where it pinches.

“You are a homegrown politician and understands everything about us. As our son, as you are going out to battle, we are behind you.”

Senator Diri, who restated his position on zoning of the presidency, emphasised that for the sake of equity, justice and fairness, the presidency should revert back to the southern part of Nigeria.

He solicited the understanding and support of the North in the South’s quest to produce the President in 2023.

Diri further stated that Nigerians were looking up to the PDP to rescue the country, stressing that there was need to unite the party and focus on issue-based campaigns rather than engage in campaigns of calumny.

He also lamented the collapse of the economy and insecurity in the country, saying “everything has fallen from top to bottom and Nigerians are waiting for us as a party to reverse the situation.”

Earlier, Governor Wike said he and other PDP leaders were in Bayelsa to formally seek the support of party delegates ahead of the presidential primary.

While applauding Diri for providing purposeful leadership and embarking on robust infrastructure development of his state, Wike said the 2023 election required an individual that can withstand the All Progressives Congress and win it for the PDP.

He also said he was running for the presidency as the country at this time required a firm leadership with the capacity to turn around its fortunes for the benefit of all Nigerians.

The Rivers governor berated aspirants in APC that are promising to sustain the legacies of President Buhari, which he said were suffering, economic hardship and unbridled corruption.

He noted that anyone promising to continue such legacies deserved God’s forgiveness.