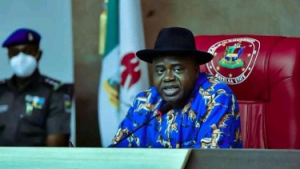 Bayelsa State Governor, Senator Douye Diri, has said that no region can produce the president of the country without the support of other regions.

He specifically stated that the demand of the southern governors that the presidency be zoned to the South cannot be achieved without the support of the North and vice versa.

The Bayelsa governor urged PDP members to collectively work for the success of the party in next year’s presidential election.

Diri noted that as an opposition party, what should be paramount is how to wrest power from the ruling party, which he said had lost grip of governance in all aspects.

While restating the call for the PDP to zone the presidency to the South, Diri stressed the need for political offices to be rotated among different parts of the country to ensure equity, fairness and justice as exemplified by the PDP in its last national convention.

The Bayelsa helmsman, however, noted that God remained the ultimate decision maker on who becomes the PDP flag-bearer and that he would support whoever emerges as the party’s choice.

The governor urged his Bauchi counterpart to speak on issues about the party and how to better the lot of Nigerians, saying that the world and Nigerians are looking up to the PDP to salvage the country from total collapse occasioned by the bad governance of the All Progressives Congress (APC).

He commended the humble disposition of Governor Mohammed and thanked him for starting his presidential declaration from the state.

His words: “Nigeria is waiting for PDP. Our party must be united and support whoever emerges.

“Even in our quest for a southern president, we need the north. We have to court the north, speak with the north and whoever that God so appoints to be the president.

“You are one person this state has taken as our own. You have the goodwill of your people in Bayelsa State.

“But let us all caution ourselves that we are in opposition. It appears some of us still do not understand that fact. We should be talking about we and not necessarily I. At the end of the day, the final decider is God. If God decides it won’t be a president from the south, we cannot run away from that decision. We will stand by our party and work with that person.

“I am one person that has said so much about our party’s offices to be rotational. That is what we did in the convention where we zoned offices. That is for fairness, justice and equity.

“I like to restate and re-emphasise that we need to be at the centre. Nigeria is falling apart and we need to rescue the country. The world is looking up to PDP for Nigeria to work again.

“Bayelsa is your home. We are happy to receive you and equally happy that you are kicking off your presidential declaration from Bayelsa, your home state.”

Speaking earlier, Senator Bala Mohammed advised other PDP aspirants to be humble in the quest to get support for their presidential ambition.

The Bauch governor, who described Bayelsa as his second home, noted that he was in the state to formally declare his intention to run for the presidency.

According to him, as a democrat and having benefited from people all over Nigeria, he is not sectional and would support whoever emerges as the party’s candidate for the 2023 presidential election.

He called on other aspirants to close ranks and work together for the PDP to take over power at the centre.

Bala said: “Those of us that have come out, let us have humility. We have to have the synergy and understanding that we are just stepping out because it is time for us to step out.

“We cannot be successful without everybody. We must synergise and fraternise.

“This is the first time I am stepping out to express my aspiration as a presidential aspirant. I have come to Bayelsa to meet our party. To say to the outside world for the first time that I am running for the presidency of Nigeria.

“You know my public life and antecedents, I don’t believe in sectionalism. I believe in justice, equity and fairness. I have benefited so much from Nigerian patriots from every part of the country. The one I have benefited most is from Bayelsa, who assisted me to come to national limelight. I will never take that for granted. That is why I am starting with Bayelsa. This is my home after Bauchi.

“I believe in Nigeria and if I am not there, whoever is the candidate, I will support. I respect people. I may not be the best.”