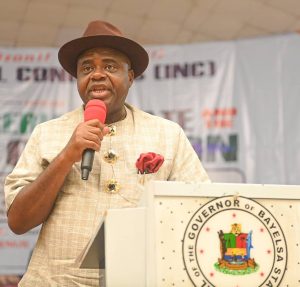 Bayelsa State Governor, Senator Douye Diri, has directed the police in the state to fish out killers of a chieftain of the All Progressives Congress (APC), Mr. Sunday Frank-Oputu.

Mr. Frank-Oputu was assassinated by yet to be identified gunmen on Tuesday night at his Yenagoa residence.

Governor Diri, who condemned the killing
during the 73rd state executive council meeting in Government House, Yenagoa, on Wednesday, described the incident as most unfortunate and unacceptable.

A statement by his Chief Press Secretary, Mr Daniel Alabrah, quoted him as calling on politicians to play politics devoid of violence.

He assured that those behind the dastardly act will be unmasked and made to face the wrath of the law.

He expressed his condolences and that of the government to the immediate family of the deceased.

The governor also denounced the burning of the houses of a serving House of Representatives member and that of his brother in Aghoro Community in Ekeremor Local Government Area, describing it as uncalled for.

He also assured that the perpetrators will be brought to book to serve as deterrent to others.

He said as an immediate measure to maintain security, the leadership of the community has been sacked until further notice.

He called on the people of the state to embrace peace at all times and learn to be their brother’s keeper.

His words: “We received the sad news of the asassination of Sunday Frank-Oputu. Let me say that killing does not settle scores. We cannot bequeath a state of killings to our children.

“Let us build our brothers and sisters, and not to assassinate them. On behalf of our government, we send heartfelt condolences to the family.

“We have put the security agencies on their toes to go after the killers. We will do everything within our powers to track down those responsible. Our state has been very peaceful and there is no reason for any man to take the life of another.

“In Aghoro, the homes of a member of the House of Representatives and that of his brother were razed. I hereby disband the community leadership in that community.”