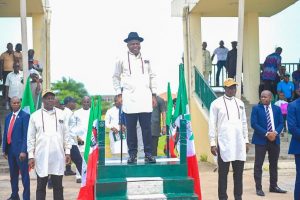 Bayelsa State Governor, Senator Douye Diri, has approved additional N200 million for the payment of pensioners’ gratuity for the month of May.

The governor gave the approval on Sunday at this year’s Workers Day celebration while responding to the demands of labour leadership in the state.

Senator Diri assured retirees that N400 million would be made available this month to accommodate a sizeable number of pensioners in view of the backlog of arrears.

While appreciating workers in the state for their support and the existing harmonious industrial relationship with his administration, the state’s helmsman
noted that his government has prioritised workers welfare to enhance productivity.

The governor also approved a number of the workers requests, which include implementation of the annual step increment as well as the release of funds for conduct of the 2022 promotion exercise for both the state and local government levels.

The governor also approved the financial implementation of 2021 promotion exercise for workers and directed the relevant government officials to negotiate with labour to come up with feasible recommendations as soon as possible.

On payment of minimum wage to workers in tertiary institutions in the state, Diri explained that an implementation and revision committee had been set up under the leadership of his deputy and the report was being awaited for full implementation.

His words: “I am not unaware of the long queue for pensioners’ gratuity monthly. As you are aware, we are treating the backlog of payment of gratuity.

Senator Diri equally directed the Commissioner for Education, Gentle Emelah, to come up with recommendations for the monthly running cost of government-owned technical colleges for immediate implementation.

Also, the governor directed the relevant officials in the Ministry of Health to ensure the payment of call-duty allowance to specialist nurses as approved in 2014 in tandem with extant rules.

According to him, his administration is establishing technical colleges across the eight local government areas of the state to train people to become employers of labour rather than becoming job seekers.

In a joint address by the Nigeria Labour Congress (NLC) and Trade Union Congress (TUC), presented by the state NLC chairman, Comrade John Ndiomu, labour was full of praises for the Diri administration’s workers-friendly posture.

The NLC and TUC applauded the governor for prompt payment of salaries and gratuities, infrastructure development and numerous other projects that were ongoing across the state.

According to him, complete implementation of the Oracle payment system at the state level and the building of a befitting edifice for the state’s media organisations were some of the achievements that have endeared Diri to workers in the state.

Highpoint of the celebration was the pronouncement of cash award by the governor for the march past.

The state chapter of the Judiciary Staff Union of Nigeria clinched the first prize of N2million while the National Association of Nigerian Nurses and Midwives got the second prize of N1.5million and the third prize of N1 million went to the state branch of the Nigerian Union of Pensioners.