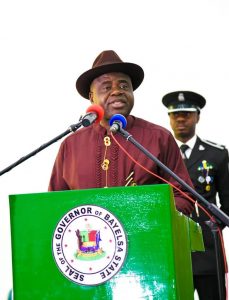 Bayelsa State Governor, Senator Douye Diri, has said the focus of his administration is to open up the riverine state by linking rural communities by roads.

Speaking through his Chief Press Secretary, Mr. Daniel Alabrah, on a Yenagoa-based radio station on Saturday, Governor Diri said Bayelsa was not in competition with any other state as all states had their peculiar needs and priorities.

According to the governor, one of the major challenges of the state is its riverine nature, which restricts access to rural communities by road as well as hinder agricultural produce from reaching markets in the state capital and other cities.

“This is why our administration is focused on constructing roads to rural communities where the bulk of the poor people live,” he said.

Governor Diri stated that his administration is prudently expending its 13% derivation funds and other refunds by the Federal Government on the construction of the three senatorial road projects as well as other people-oriented projects.

He listed some of the ongoing big-ticket projects to include the 42km Sagbama-Ekeremor road, which costs N34.4 billion with seven bridges and five already done by his administration.

He also said the 22.2km Yenagoa-Oporoma road will gulp N31.4 billion as well as the 21km
Igbogene-Elebele road expected to gulp N54.56 billion.

“Our administration has also embarked on the first phase of the Nembe-Brass road with 10 bridges at a cost of N54 billion as well as the 10.2km dual carriageway Glory Drive road from the Ecumenical Centre at Igbogene to the Tombia-Amassoma road.”

Some other infrastructure projects embarked upon by the administration include the 4.5km Igbedi road, the media complex, Elebele bridge, Nembe Unity bridge, phase one of the Igbogene-Elebele ring road, lecture halls and laboratories at the Bayelsa Medical University, which were all completed and inaugurated during the administration’s second anniversary in February this year.

Governor Diri further stated that his administration has equally carried out numerous training and empowerment programmes such as the ICT-focused Diri Digital Entrepreneurship Empowerment Programme (DDEEP) with 8,000 beneficiaries across the eight local government areas of the state as well as training in other vocational areas such as catering, fashion designing, shoe making and agriculture.

“No fewer than 500 of our youths and women have been trained at the CSS Integrated Farms in Nasarawa State,” stressing that the government is setting up those trained to own their farms and small-scale businesses.

In addition, he said the administration initiated a social welfare scheme that captures small business in the rural communities.

Under this scheme, 210 different beneficiaries from each of the 105 wards in the state get N200,000 each monthly to grow their small businesses.

While acknowledging that the state had received the crude oil, SURE-P and oil subsidy refunds from the Federal Government in installments in the last two years, Diri said the receipts had always been captured in the monthly transparency briefings and that the state had nothing to hide.

The Bayelsa helmsman insisted that insinuations in some quarters that the government did not disclose the receipt of the funds is false and urged the people to pay attention to the transparency briefings as the financial books of the state were always open.

He further explained that statutory allocations to Bayelsa and its internally generated revenue were not more than N3 billion monthly, saying it is the derivation funds that make it possible for the state to embark on the big projects as well as pay workers salary regularly.

He assured that his administration was determined to make a positive difference in the lives of people of the state.