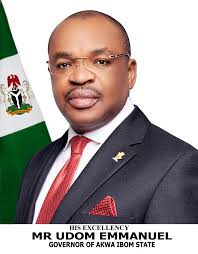 More than 14 days into the worst humanitarian crisis facing the Oil rich Bayelsa State, Gov Douye Diri has cried out that not relief seem seem to be in sight from the Federal Government even as Akwa Ibom Governor, Udom Emmanuel has expressed shock at the level of devastation occassioned by the menacing floods that have swept over more than 300 communities in Bayelsa State.

Governor, Mr. Udom Emmanuel, who sympathised with his Bayelsa counterpart, Senator Douye Diri, over the flood situation describee it as very pathetic.

Mr. Emmanuel, who led a delegation of members of his cabinet to Government House, Yenagoa, on Wednesday, said it was his cabinet’s decision to visit Bayelsa based on the magnitude of the flood that hit the state.

He applauded the relentless efforts of Governor Diri in standing by his people in their moment of despair, describing his gesture as a mark of true leadership.

His words: “With what I saw on television, l just could not stay. I did not know the extent of the damage the flood had caused the people of the state. My people played the whole video clip in our Executive Council Chambers and we were moved to tears. We decided at the meeting to be here to sympathise with you and your people.”

Mr. Emmanuel said whatever affects Bayelsa also impacts on the people of his state since they share a common affinity in the Niger Delta.

“The destinies of millions of our people are tied to your own. You have tried to show that you care and restore hope. That show of care strengthens your people in spite of the dire situation the flood had put them.”

The Akwa Ibom governor, who presented a cheque of N100 millon to Diri, also announced that a truck-load of relief materials courtesy of his wife’s Family Empowerment Programme Foundation was on its way to support flood victims in the state.

Responding, Senator Diri expressed gratitude to Governor Emmanuel for his show of love and brotherhood, describing the impact of the flood as immeasurable.

He said the only means of communication was by air and through the maritime domain as the roads into the state have been cut off as well as power supply with electricity transformers submerged in water.

According to the state’s helmsman, the level of destruction is unimaginable as 99% of people of the state were displaced safe for communities close to the Atlantic Ocean because of the salinity of the water.

“We see you not only as a friend but also a brother. It is a trying time for us. This is the time we need leaders not politicians. And you have proved to be a true leader. The cheque of N100 million will be judiciously used and accounted for. You have done what a brother should do.”

The Bayelsa governor, who said the state government had made a clarion call to corporate organisations, international agencies and multinational corporations, lauded his Akwa Ibom counterpart for his prompt response to the plight of the government and the people.

In a related development, Governor Diri has said the state was yet to receive any relief item from the Federal Government.

The governor explained that although the Minister of Humanitarian Affairs and Disaster Management said the Federal Government had sent relief items to 21 states affected by flooding, Bayelsa was yet to receive such items.

He however thanked the Nigeria Air Force on behalf of the state for assisting the relief effort by airlifting of food items that were procured by the state government.

He commended the Chief of Air Staff for coming to the aid of the state and the people in their moment of distress.