Bayelsa State Governor, Senator Douye Diri, has assured of the state’s collaboration to tackle the menace of oil theft, which he says poses a serious threat to the Niger Delta region. 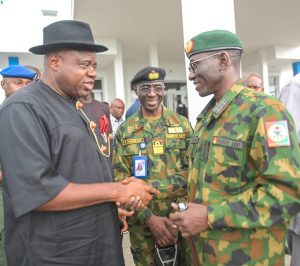 Speaking in Government House, Yenagoa, on Monday when he received a federal government delegation led by the Minister of State for Petroleum Resources, Chief Timipre Sylva, Governor Diri remarked that oil theft has seriously affected the environment and image of the region negatively.

He called for urgent actions to end the ugly trend in the interest of the region and the country at large.

Governor Diri lamented that oil theft, which also affects government at all levels, has denied the locals their means of livelihood, stressing that if it is not stopped or reduced drastically, the implications would be grave.

Recalling how the Chief of Defence Staff had talks with governors on the same issue, Diri welcomed collaborative efforts between the states and the federal government to tackle the menace.

He assured the delegation that his administration will play its role in ensuring that it is tackled effectively.

“We are talking about our environment that has been brazenly polluted through oil bunkering activities. If you go to our communities, you will see oil floating on our rivers, and that has led to the locals not having a means of livelihood. It has led to unknown diseases and sicknesses.

“There is a spiral effect of oil theft that is going on in the Niger Delta and it affects the communities and the people. So, I welcome you and I assure you that we will collaborate to ensure that oil theft is brought to an end.”

In his remarks, the Minister of State for Petroleum Resources, Chief Timipre Sylva, said the federal government delegation was in the state to seek collaboration to end oil theft in the Niger Delta.

He said the stealing of oil was going on at an alarming rate and should no longer be allowed given its negative effect on the economy of the country.

Chief Sylva lamented that production has been badly affected, which is also having a negative impact on foreign investments in the country.

The former Bayelsa governor commended Diri for his willingness to collaborate with the federal government to end oil theft.

He noted that the activities of oil thieves was bleeding the nation and called on those involved in the act of sabotage to have a rethink, failing which the military will clamp down on them.

Also, Group Managing Director of the Nigeria National Petroleum Company Limited, Mele Kyari, said the country was facing a dire situation that is not just affecting the economy but also the environment.

He said the importance of collaborative efforts with states in the region cannot be over-emphasised as only one tier of government cannot do it alone.