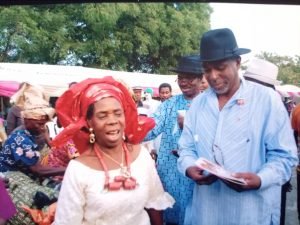 She grew up in a large Christian family with many siblings and quickly got involved in taking care of her extended relatives. As a young and vibrant trader, Correct Mama traversed the famous trade routes  in the creeks of the Niger Delta, mostly by canoe,including Torugbene, Peretorugbene, Isampou, Ndoro,Tamigbe, Kpakiama,  Kiagbodo, Ogbobagbene, Ojobo, Aleibiri, Ogriagbene, Bomadi and Patani all in the old Western Ijaw Division.

CORRECT MAMA was hugely popular in the trading  circles, while her friendly and humorous disposition were some of the most prominent features that endeared her to people. As a result, she made several business acquaintances and established lifelong relationships with people she encountered during her ventures.

In 1953, a young and beautiful CORRECT MAMA ,fell in love with a young promising and handsome EDWARD ERETE ASU and got married to him almost immediately and  with whom she had one child, Elder Asu Beks, a year after. There was no surprise, therefore, that Correct Mama was very passionate about her only child and went to great lengths to ensure that he succeeded in life. ” My mom remains my greatest fan”, Elder Asu Beks would tell anyone who cares to listen.

She was known to always say “There are people who have about ten children or more, but the only one that God has given me is even more valuable than a dozen children .”, she would say.

Correct Mama lived her life in the fear and worship of God. She was a member of the Assemblies of God Church where she played an active role in religious activities. In particular, her engagements were very prominent at the 22 Road Festac Town, Lagos and Tuomo, Delta State parishes of the church respectively.

Mama did not have the privilege of western education; however, she was reputed to have been very intelligent with a keen understanding of the predominant economic and social trends at the time. She also possessed a powerful memory that she put to good use as a community historian.

In addition to her social activities, Correct Mama harnessed her influence as a Women Leader in her community to establish cooperative societies and other grassroots programmes.She was generous to a fault. On each occasion she returned from Lagos after visiting her son,her home was usually a beehive of activity as she was too ready to share the goodies she brought from the city. Ironically, however, mama detested politics, a fact that is arguably responsible for her son’s persistent apathy towards the profession.

CORRECT MAMA  shared a special bond with her son, Elder Asu Beks, who blessed her with nine grandchildren and four great-grandchildren. Despite her age, she selflessly split her time between Lagos and Delta State in order to spend quality time with her son and grand children who always looked forward to her presence and gifts from the countryside.

It was during one of her visits that Correct Mama experienced what she called “one of her most unforgettable experiences” – which occurred when she boarded a plane for the first time in a flight from Lagos to Warri. She also treasured memories of her grand 80th birthday anniversary celebrations which took place at the Aquaterra Complex in Lagos, under the Chairmanship of the former Comptroller General of the Nigeria Customs Service, Dikko Inde Abdullahi (MFR). And she never stopped asking her son, ” is this the way i will be celebrated when i join my ancestors?

As a Warri woman, it is a known fact that CORRECT MAMA ‘no fit carry last’. She was known to mix her communication with some slangs and balkanisation of some English words, which always elicited laughter from everyone around her, especially her grand children. She was equally obstinate and refused to be corrected when some of the errors were pointed out.

For example, CORRECT  MAMA referred to the noodles brand ‘Indomie’ as ‘Dominic’, often saying “Na ‘Dominic’ una dey chop?” She also referred to the fruit flavoured drink ‘Lacasera’ as ‘Shakara’; and it is up to you to guess her reaction when the children tried in vain to point out the correct names.

When scolding her grand children whom she was very fond of CORRECT MAMA was known to say things like “Which planet you come from?”; “You dey take me play?” and “You dey trek me?” to show her displeasure at something or someone. For son, grand children and those around her, these slangs usually evoked tons of laughter.

CORRECT MAMA, who was also known for her stylishness, would acknowledge compliments on her appearance with the response “I be London woman.” And to express honesty, CORRECT MAMA would say “I no know divine.”

Mama lived a transparent and truthful life, administering her affairs with equality, fairness and justice. She significantly impacted several lives in her lifetime as a care giver and continues to attract goodwill to her family even in her absence. She will be greatly missed by her family, friends and community. May her gentle soul rest in perfect peace, Amen.