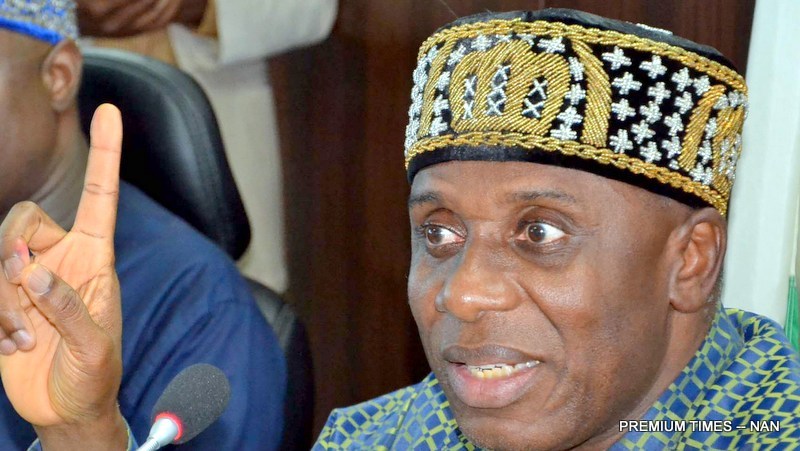 The Minister of Transportation, Rotimi Amaechi on Thursday announced that he will not disburse the Cabotage Vessel Financing Fund (CVFF), dashing the hopes and expectation of indigenous ship owners, who have been waiting for the disbursement of the fund for more than a decade. This is even as the ship owners demanded the sack of Dakuku Peterside as Director-General of the Nigerian Maritime Administration and Safety Agency (NIMASA) for his incompetence in running the affairs of the agency.

Amaechi told a gathering of ship owners and key stakeholders who converged at a workshop and dinner organized by the Ship Owners Association of Nigeria (SOAN) that as long as he remains the minister, the fund will not be disbursed.

The CVFF which currently stands at over $100billion was created solely to empower local ship owners in the industry to enable them compete favourable with their foreign counterparts.

The CVFF currently domiciled in the Nigeria Maritime Administration and Safety (NIMASA) has become an issue of controversy as past administrations of the agency were not able to disburse it.

According to Amaechi, the prescribed way of disbursing the fund has no proper structure in place and to guide against past mistakes of releasing the funds into the wrong hands, it will not be disbursed even as he dismissed claims that the fund has accrued up to $100billion.

He said, “I will not release that fund until I am removed tomorrow as the minister of transportation. Why won’t I release the fund? We gave over N300billion to owners and businessmen in the aviation industry, some took N35billion, N3.2billion and they disappeared and they used the money to go and build bank in Ghana and Sao Tome and nothing has happened to them.

“If you teach me how to spend that money, we will spend it. But to give you that kind of money that we gave to aviation and the money disappeared, no I will not no matter what you do.

“Bank of Industry for example is structured and if somebody doesn’t pay they will grab him but in our own, there is no structure. Once I pay you, you go. The law says recommendation from NIMASA to Minister and once the minister approves, you take your money but how do I hold you back?

“They said it is over $100billion that is there in the CVFF fund but when I asked the NIMASA man (Dakuku Peterside) he said it is not up to that because by the time we took over office, the former NIMASA man (Patrick Akpobolokemi ) had given out all the money and who he gave it to nobody knows. They have used it to build faculty of maritime studies all over but what did ship owners do?”

Ameachi also berated the Director General of NIMASA, Dakuku Peterside for failing to implement the report of the ministerial committee set up to reposition the agency after he had given his approval.

“As the Minister of Transport, I sat down with all of you and you set up a committee, the committee submitted its report, you indicted us there. When I got the report I asked the NIMASA DG who is also the chairman of the committee why are you not implementing the committee’s report, he said he is yet to get directive from me and I gave that directive in writing.

“So he is yet to answer why he is not implementing but I am still not satisfied with the industry because I believe that the industry is supposed to produce more money than it is producing. I am not looking for financial audit but performance audit and heads may likely roll when the audit report comes,” he said.

“We stopped being in the executive by 2011 and by the time we started lobbying, we are like new persons to IMO. Our position was a good attempt but wait until 2019 when we will go back to contest for the other position.”

Reacting to the minister’s position on the CVFF, President of SOAN, Greg Ogbeifun said the minister lacks the power to hold on to the funds.

He said, “The law require that the minister sets up guidelines for disbursement. The law does not allow you to sit on the money doing nothing which is the situation we are in now and the ship owners are still contributing money to that fund up till now.

“Our tonnage is going down, seafarers are going out of job, the businesses are collapsing and you are sitting on the money and in the midst of that, you are still collecting money in a regime where our shipping business is dying.”

Ogbeifun who expressed his displeasure over challenges facing indigenous ship owners and the turn of event in the industry in the last two years called for the immediate resignation of the NIMASA DG.

He said while past NIMASA Director Generals have been sacked due to fraud related cases, this is the time to have the political boldness to sack the present leadership of NIMASA due to lack of competence.

He said, “We will be deceiving ourselves if we pretend not to know that the IMO and the rest of the world are aware that our maritime domain has remained a high security risk and it is most unsafe for seaborne trade and activities such as piracy, hostage taking and kidnapping.

“That 22 years after the demise of the Nigeria National Shipping Line (NNSL), we have not been able to midwife the emergence of a Nigerian fleet be it public, private or fleet resulting from Public Private Partnership.

“IMO has pass a vote of no confidence on our maritime administration and if we do not do the right thing, which is taking the bold action of asking the leadership of the maritime administration to resign or the government should sack them. If we don’t do that, the International community that has not accepted us into the council will believe we are not ready to change.

“Government should stop giving excuses why they failed and look at issues in the industry. We have an administration for two and half year in office, things have gone worst, they have not even visited our maritime institution in Oron. Instead we are spending money abroad; the international community are laughing at us because they know we do not know what we are doing, and we are saying enough is enough.”