An infographic released by The World Shipping Council shows the 10 largest ports by TEU (Twenty-foot Equivalent Unit) volume as of 2014, with a comparison of container throughput in 2013 for each port.

Built in 1819, the Singapore Port counts as an economic backbone because of Singapore’s lack in land and natural resources. The harbor plays a vital role when it comes to the importation of natural resources, and the re-exporting of elaborated products, for example, wafer fabrication or oil refining to generate revenue. Yearly, thousands of ships use the Port of Singapore, connecting it with more than 600 other ports in 123 countries divided over six different continents.

The Shenzhen port is the home-base of over 35 shipping companies, together good for around 130 international container routes. On a monthly basis, 560 ships are on call at Shenzhen port and also 21 feeder routes to other ports in the Pearl River Delta region.

The Port of Hong Kong, located by the South China Sea, is a deepwater seaport dominated by trade in containerized manufactured products, and to a lesser extent raw materials and passengers. The port is known to be an X-factor in the economic development of Hong Kong. The harbour set a record in its container throughput in 2007 by handling 23.9 million TEU’s.

The Port of Ningbo-Zhoushan, China, is with a combined throughput of 873 million metric tons the busiest in the world when looking at cargo tonnage. This was achieved after the port completed the merger with the neighbouring Zhoushan Port Group in 2015.

The Port of Busan is the largest port in South Korea, located in the city of Busan, the second largest city in the country. Opened for the first time in 1876, the port handled 13.426 million TEU’s of container cargo in 2008, which was then the fifth highest annual cargo haul in the world. In July 2010, the port proudly announced a 21.7% year-on-year rise in container cargo throughput.

Port of Guangzhou is the main seaport of the city of Guangzhou, Guangdong province, China. The port also serves as the important economic and transport center for the Pearl River Delta region and Guangdong province. It is also vital transport hub for industries located in neighboring provinces such as Guangxi, Yunnan, Guizhou, Sichuan, Hunan, Hubei and Jiangxi. The port is currently dredging to allow 100.000 tonnes vessels to enter Nansha terminal in low tide.

A large deep-water port located in Jebel Ali, Dubai, United Arab Emirates. Jebel Ali is the world’s largest man-made harbour and by far the busiest port in the Middle-East. The harbour was constructed in the late 1970’s to supplement the facilities at Port Rashid.

This list also ends with a China-based port. The Tianjin port counted 13.01 TEU’s in 2013, a significant rise compared to the years before. The Tianjin port is particularly known as the center of hazardous chemicals, such as compressed air, flammable and corrosive substances, oxidizing agents, and toxic chemicals.

A black page in the history of the port are the 2015 Tianjin explosions, taking place on Saturday the 12th of august. Two explosions within a minute, caused by an overheated container of dry nitrocellulose, initiated the disaster in a container storage station located in the port. As of 12 September 2015, 173 people are confirmed to have died from the explosions and 797 others have been injured. Due to poor coverage of the event and the emergency response, both the China-based harbour as the Chinese government received criticism. 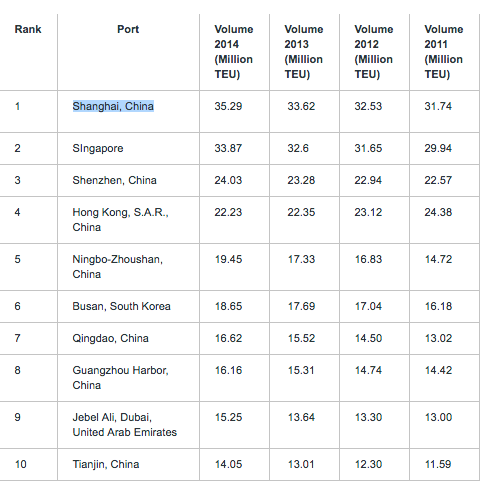