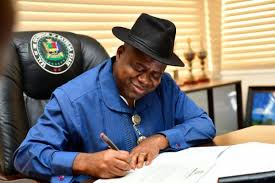 The Bayelsa State Executive Council has approved the construction of Phase One of the Nembe-Brass road in Bayelsa East Senatorial District of the state.

This was disclosed on Wednesday at a joint press briefing after the 70th session of the executive council in Government House, Yenagoa.

Addressing the press, the Commissioner for Information, Orientation and Strategy, Ayibaina Duba, accompanied by his counterparts of the Ministries of Works and Infrastructure, Moses Teibowei, and Health, Dr Pabara Igwele, stated that the first phase will cover a distance of 21 kilometres with 10 bridges.

Duba said the Governor Douye Diri administration inherited two senatorial road projects from the previous administration and promised to embark on the third one, which is the long-awaited road from Nembe to Brass.

He said: “We are pleased to announce that the State Executive Council has given approval for the award of contract for phase one of the Nembe-Brass road. It covers 21 kilometers with 10 bridges.

“The construction will start soon. The procurement board is directed to facilitate the process in a manner that there would be no delay in the award of the contract to a very competent contractor.

“Due to the amount of work required on the road, it is divided into three phases. Phase one will be from Nembe to the Saint Nicholas River.”

The Works and Infrastructure Commissioner, Moses Teibowei, further explained that six of the 10 bridges have a 30-metre span each, one is 60-metre, another one is 90-metre while two have 120-metre span each.

The state exco also approved a weekly jogging exercise for members to be led by the governor and his deputy every Thursday morning.

Describing the decision as a means to keep fit and prevent heart-related ailments, the Health Commissioner, Dr Igwele, said the exercise would commence from the Berger Junction to the Samson Siasia Sports Complex in Yenagoa.

Also speaking at the briefing, the Special Adviser on Political Matters, Chief Collins Cocodia, cautioned against aspirants for elective positions sponsoring protests to advance their interest.

Cocodia noted that members of the Peoples Democratic Party (PDP), who have electoral value, know the procedure to achieve their goals but not through protests.

“Lately, people sponsor protests from behind the scene to call on them to contest for political offices or protest against other aspirants.

“The governor has directed that such action should stop because it is an internal party matter and whoever is aspiring knows the procedure to follow.

“They should also be informed that there is a party disciplinary committee already inaugurated and if it is discovered that such protests are sponsored, we will make sure that they face the disciplinary action of our party.
Our party is one big united party.”

The three bills were signed in the presence of the Deputy Governor, Senator Lawrence Ewhrudjakpo, Speaker of the state assembly, Abraham Ingobere, and other principal officers of the legislature.

The governor noted that the new laws would enhance the administration of justice in the state.

He said the Multi-Door Court Law provides the option of Alternative Dispute Resolution (ADR) to resolve disagreements outside the courts, which he noted have been inundated with cases.

According to him, the Ijaws have customs that have been in existence for generations but have not been documented, adding that the customary court laws would address such issues.

The governor, who commended the assembly for passing the bills, assured the legislature that both arms of government would continue to synergise to engender good governance and development.

In his remarks, the Speaker, Abraham Ingobere, said the laws would fast-track the administration of justice in the state.

He explained that the Customary Court Law was aimed at protecting the rights of widows and the girl child among other customary issues that relate to the Ijaw people.