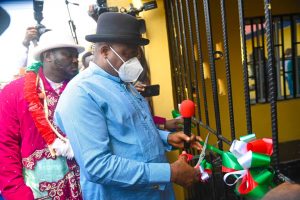 Bayelsa State Governor, Senator Douye Diri, has said despite protest from some quarters, the removal of the paramount ruler of Otuokpoti community in Ogbia Local Government Area, Chief Cousin Wongo, is irrevocable.

Governor Diri, on Monday, announced the monarch’s dethronement as well as the removal of the community development committee chairman and its youth president as a result of their complicity in the kidnap of the Commissioner for Trade, Industry and Investment, Mr. Federal Otokito, from his residence in the community.

Mr. Otokito, however, regained his freedom on Monday after his abductors inflicted severe injuries on him.

Speaking during a reception at Otuokpoti shortly after commissioning a Divisional Police Station constructed by the Ogbia council chairman, Ebiyon Turner, the governor said his action was in accordance with the Nigerian Constitution and the laws of Bayelsa State.

His words: “I did not depose your paramount ruler because I hated him. The circumstances that led to his dethronement are known to me and the commissioner of police. And that deposition stands. Anybody that is protesting, I am very sorry.

“As governor, once I make a pronouncement, that is it. Nobody can do anything about it. In the Constitution and the laws of Bayelsa on chieftaincy and traditional rulers, the final authority lies with the governor.”

He also disclosed that the Commissioner of Police had earlier hinted that the state command had its searchlight on the community before the kidnap of his cabinet member.

He called on the newly appointed paramount ruler, Chief Rescue Abe, to unite the Otuokpoti people and not allow the community to be used for criminal and illegal oil refining activities.

“This government will not condone crime and criminality. The newly appointed paramount ruler and his cabinet should work to see that there is love in Otuokpoti community.

“The paramount ruler, community development committee chairman and the youth president were the sacrificial lambs as there were also other people involved. Several others were culpable. If we go down, it would cause trouble for many people. That is why we took the leaders as the sacrificial lambs.”

The governor, who decried oil bunkering activities in the state, highlighted the health hazards arising from such acts to include terminal illness, environmental pollution among others.

While granting the request of the community, Diri directed the Commissioner for Works and Infrastructure, Moses Teibowei, to construct the road to the new police station.

He also directed the Education Commissioner, Gentle Emelah, to include fencing of the community’s secondary school as well as building of new classroom blocks in the next batch of contracts to be awarded.

The governor, who was accompanied by the Commissioner of Police, Mr. Ben Okolo, and other top government functionaries,
commended the Ogbia council chairman, Ebiyon Turner, for initiating and completing the facility.

He however said the structure would no longer be adequate for its current status as it was initially built as a police post and directed that it be upgraded.

Reminding council chairmen in the state of his directive on legacy projects, Diri urged them to emulate the Ogbia chairman by embarking on projects that would touch the lives of the people.