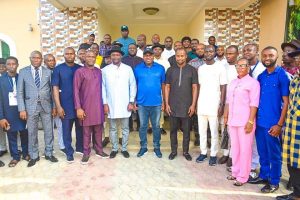 A coalition of youth groups has commended the disposition of Governor Douye Diri towards development of the youths.

The youth organisations, who presented the Most Youth-Friendly Governor Award in the Niger Delta Region to Senator Diri at his country in Sampou at the weekend, said the Bayelsa governor has re-defined youth engagement in less than two years in office with the number of young persons appointed into his government.

Led by the IYC spokesman, Comrade Ebilade Ekerefe, during the visit, the youths said they decided to honour the governor for placing premium on youth development in the state.

Comrade Ekerefe stated that they observed that out of over 2,000 appointees of the governor, about 70 per cent were youths.

Describing the governor as one who placed premium on youth development, Eberefe thanked him for accepting to receive them regardless of his numerous engagements at the end of the year.

He said despite the initial economic challenges that greeted the governor’s first year in office occasioned by the COVID-19 pandemic, he still placed the development of the state as top priority by awarding contracts to open up the state.

He said: “Every strategic leader of the Ijaw Youth Council and youth organisations represented by their leaders are here to pay you this special yuletide visit for placing premium on youth development in Bayelsa. You are a father and leader that understands the importance of the youths in government.

“We are also very pleased that out of the 2,000 appointment in your cabinet, close to 70 per cent are youths.

“As a miracle governor, who came at a time of serious socio-economic challenges as a result of the COVID-19 pandemic, we have witnessed very carefully that you have been able to manage the scarce resources of the state prudently in strategic infrastructure development.”

While thanking the governor for his administration’s various capacity building and manpower development programmes directed at the youths, he however appealed for the creation of a ministry solely for youths separate from the current Ministry of Youth and Sports Development, in order to have a clear direction to address the challenges associated with youth affairs.

Responding, Governor Diri appreciated them for the visit and the award.

He also commended them for not resorting to antagonising the government and other leaders of the state but rather joining in the building process of the state.

He said youths across the world were known for building and if that is missing, then that society is doomed.

His words: “I think this is a very good way to wind down 2021 and start on a fresh note.

“I also appreciate you for the discerning spirit of not antagonising government but coming close to us to be part of the building process and not to destroy our state. Youthful age all over the world is the age of building and if they do not build, that society is gone.”

Governor Diri, who expressed satisfaction with the performance of youths in his government, called on the IYC and its affiliates to orientate their mind from seeing politics as the only way out in life. He urged them to also venture into business.

He said due to the importance attached to youth-related affairs by his government, the budgetary allocation to the Ministry of Youth and Sports Development was increased from the initial figure of N500 million to N2 billion in the 2022 budget.

He however stated that the request for a separate ministry for youths was not out of place and assured that it would be looked into in the first quarter of this year.

The Bayelsa helmsman also charged the youths to channel their energy to positive ventures and towards development of the state rather than engaging in violent or drug-related activities.

He promised to sustain his policy of running a youth-oriented government.