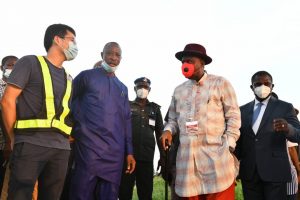 Bayelsa State Governor, Senator Douye Diri, has reaffirmed the commitment of his administration to the three senatorial road projects in the state.

Speaking at Aguobiri during an on-the-spot assessment of work on the Yenagoa-Oporoma road in Bayelsa Central Senatorial District, Governor Diri stated that his government’s target is to ensure that this year the road is tarred to Aguobiri as well as the bridge across the river is completed.

The project was started by the immediate past Senator Seriake Dickson administration.

A statement by his Chief Press Secretary, Mr. Daniel Alabrah, quoted the governor as saying that once the bridge crosses the Aguobiri river, the government would ensure that the road gets to Angiama and later Oporoma, the headquarters of Southern Ijaw Local Government Area.

Governor Diri assured that the footprints of his administration would be felt in accordance with his election campaign promises.

He charged the company handling the project, Chinese Civil Engineering Construction Company (CCECC), to keep their side of the bargain, stressing that the state was in a hurry to develop.

His words: “I am not a man of too many words and promises but what we promised during the campaigns was to ensure that the senatorial roads continue from where the former administration stopped.

“We have all seen the level of work already done. So, our target for them is to tar this road to where we are now at Aguobiri. By February, I intend to flag-off the bridge construction.

“We want Bayelsans to continue to support the prosperity administration. It is their administration and we believe that before we leave, they will feel our footprints.”

Also speaking, the Commissioner for Works and Infrastructure, Surv. Moses Teibowei, assured that in a few days the contractor would be mobilised to commence work.

Responding to questions from journalists, the CCECC project manager, Mr. Eric Lee, said the company would ensure that the project is achieved within the specified time.